The Painting of Mary, Help of Christians 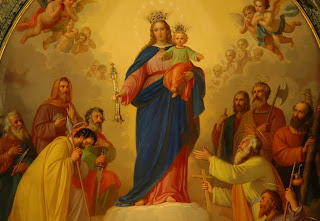 The painting was conceived by Don Bosco who spoke of it to the painter Lorenzone as a spectacle already seen.
"The Most Holy Mary in high among the choruses of angels. Then the choruses of prophets, virgins and confessors. On the ground, the emblems of Mary's great victories and the peoples of the world raising their hands towards her asking for help".
The painter made him see that painting such a picture would need a square and a church as large as Piazza Castello to house it. Don Bosco resigned himself to reducing the scale of his project.
Lorenzone hired the highest hall in Palazzo Madama and started work. After three years, the great painting was hung in its place.
Don Bosco described it thus: "The Virgin standing out in a sea of light and majesty, surrounded by a horde of angels paying homage as if to their queen. With her right hand, she holds the sceptre, the symbol of her power, and with the left, the child with its arms open wide, offering its grace and mercy to those appealing to the majesty of his mother.
Around and below them are the Apostles and the Evangelists in a state of sweet ecstasy, almost exclaiming: 'Regina Apostolorum, ora pro nobis', they contemplate the Holy Virgin in amazement. At the bottom of the picture, there is the city of Turin with the sanctuary of Valdocco in close up and with Superga in the background. The picture's greatest value is the religious ideal that makes a pious impression on whoever admires it".
According to Don Bosco's description, the painting is an effective portrayal of the title: "Mary, Mother of the Church", and a great page in Marian catechesis.
Mary, being Mother of the Son of God, is the Queen of Heaven and earth - the whole Church, represented by the Apostles and saints, acclaims her Mother and powerful Help of Christians.

Mary, Help of Christians Pray for Us!